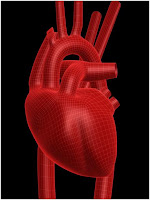 As you may have noticed, I am a huge proponent of using a heart rate monitor for virtually every workout.  After the jump, I go through the basic rationale for using one and some examples of how it can come in handy.


If you want to read more about using an HRM, you can see the other posts posts from this blog under the "heart rate" label.  I'd also encourage you to check out the album of heart rate monitor charts on my Facebook page.


As recently as a few years ago, the fitness industry encouraged exercisers to choose a target heart rate zone based on their fitness goals and stay within that range. People wishing to lose weight were told to keep their heart rates in the "fat burning range" and not to exceed it. The underlying belief was that time spent at the lower heart rate ranges would preferentially utilize fat stores over carbohydrates.

Since then, research has corrected this thinking, though. Researchers now know that the body utilizes more fat during high intensity efforts than it does during lower intensity efforts even if carbohydrate storage is used as well. In fact, the fat loss is accelerated by pushing it beyond that “fat burning zone.” Unfortunately, most cardio machines still have graphics on them encouraging users to stay within predetermined ranges.

Still, heart rate monitors can be extremely useful as a feedback mechanism throughout the workout. Here are some examples of the value of a heart rate workout on a regular basis:
Polar is the defacto standard because they were first on the market. There are some other manufacturers with big brand names like Timex, Garmin, Nike, and a few others that are out there too. They wouldn't put a sub-par product out there and risk sullying their brand.   In fact, a bunch of them just rebrand the Polar technology.  If it isn't rebranded Polar, I'm sure it's solid - otherwise it would have been scrapped.

I've played around with a lot of the various styles out there and I refuse to go with anything that doesn't have a chest strap.  Otherwise, they just don't make enough contact with skin to measure heart rate. I know some folks make sports bras that have them built-in but I've clearly never tried them out.

Anything that has a chest strap will start at the $50-65 range. They do have a lot of features going up from there, but I'm not impressed by much of that. If I can get a reliable number by just looking at it (don't have to hit a button to get it to measure), I'm happy. They do have calorie counts which are probably relatively reasonable, but I wouldn't use them for anything other than comparing the relative difficulty of one workout to the next. Certainly don't go using those numbers to plan your calorie intake or anything.

Heart rate monitors can be purchased online and at a number of different stores in the area.  REI really stands out to me for having a nice selection, particularly for sport-specific models like running and cycling.